The PDSA (Plan-Do-Study-Act) cycle is the core component of continuous improvement programs. You may have heard it called PDCA (Plan-Do-Check-Act)—and they are very similar but I have come to prefer PDSA, with the A standing for Adjust, for reasons I’ll explain shortly. Understanding the cycle and its application to continuous improvement is critical for leadership. But first, a history lesson.

In November 2010, Ronald Moen and Clifford Norman wrote a well-researched article in Quality Progress that detailed the history behind PDCA and PDSA. The cycles have their origins in 1939, when Walter Shewhart created the SPI (SpecificationProduction-Inspection) cycle. The SPI cycle was geared toward mass production operations, but Shewhart soon realized the potential application of the scientific method to problem solving, writing that “it may be helpful to think of the three steps in the mass production process as steps in the scientific method. In this sense, specification, production and inspection correspond respectively to hypothesizing, carrying out an experiment and testing the hypothesis. The three steps constitute a dynamic scientific process of acquiring knowledge.”

At the time, W. Edwards Deming was working with Shewhart to edit a series of Shewhart’s lectures into what would become Shewhart’s Statistical Method from the Viewpoint of Quality Control, published in 1939. Deming eventually modified the cycle and presented his DPSR (Design-Production-Sales-Research) cycle in 1950, which is now referred to as the Deming cycle or Deming wheel. According to Masaaki Imai, Toyota then modified the Deming wheel into the PDCA (Plan-Do-Check-Act) cycle andbegan applying it to problem solving. 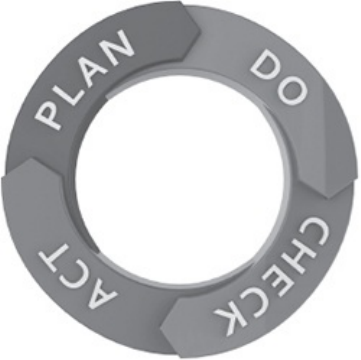 In 1986, Deming again revised the Shewhart cycle, with another modification added in 1993 to make it the PDSA (PlanDo-Study-Act) cycle, or what Deming called the Shewhart cycle for learning and improvement. (Deming never did like the PDCA cycle. In 1990, he wrote Ronald Moen, saying “be sure to call it PDSA, not the corruption PDCA.” A year later he wrote, “I don’t know the source of the cycle that you propose. How the PDCA ever came into existence I know not.”)

The PDCA cycle has not really evolved in the past 40 years and is still used today at Toyota. The PDSA cycle continues to evolve, primarily in the questions asked at each stage. Although both embody the scientific method, I personally prefer the PDSA cycle, because “study” is more intuitive than “check.” Deming himself had a problem with the term “check,” as he believed it could be misconstrued as “hold back.” I also prefer “Adjust” to “Act,” as it conveys a better sense of ongoing, incremental improvement. Just be aware that some very knowledgeable and experienced people prefer the pure PDCA!

Let’s take a look at each component of PDSA:

It’s important to realize that PDSA cycle is valuable at both process and organizational levels, something we have already discussed (in slightly different terms) in this book. For example, you start the plan stage of the PDSA cycle while evaluating your current state and creating a hoshin plan. As you execute the annual and breakthrough objectives of the hoshin plan, you move into the “do” quadrant. On a regular basis, you evaluate the hoshin plan and the results of the goals (study), then modify it as necessary for the next revision of the hoshin plan (act).

Throughout the rest of this section, I will discuss various problem-solving and improvement tools and methods for processscale improvements. Note that they all follow the same PDSA cycle.