The key to the Toyota Way and what makes Toyota stand out is not any of the individual elements…But what is important is having all the elements together as a system. It must be practiced every day in a very consistent manner, not in spurts.

For a Lean transformation to be sustained, it must be practiced and supported each and every day. Too many organizations try to implement Lean tools without understanding and embracing the Lean philosophy. They review “Lean” improvements and practices only on a weekly, monthly, or even quarterly basis. To work, Lean must be a part of the daily management routine.

Daily management at a Lean organization has several components. It often begins early in the morning with a daily standup meeting. As I mentioned earlier, this was one of the few Lean methods I had to dictate, because creating yet another meeting—let alone a daily meeting—is met with a lot of resistance! However, if run correctly, everyone soon realizes it is a very valuable meeting and it becomes self-sustaining.

Daily meetings generally start at the gemba and move up through the organization each morning, with a representative—typically the team leader, supervisor, or manager—attending the next-level-up meeting. At my previous company, the meetings started on the production floor at 6:30 a.m. and worked their way up to my executive team meeting at 8:30 a.m., which included a videoconference with our other two facilities. If a member couldn’t be there, he or she was expected to send a representative. Having these substitutes present, plus the fact that the meetings were always open to anyone else in the company, helped grow the leadership capability of our entire company— again, showing respect for people. 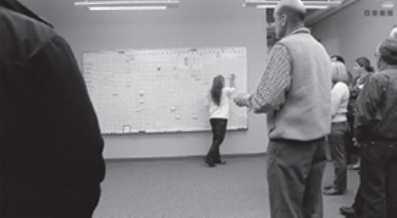 The key to making the daily meeting successful was sticking with its primary purpose, which was to review any deviations from the plan. The meeting was not a general project or production review. As a result, the entire meeting, even at an executive level responsible for multiple facilities, only lasted between five and fifteen minutes (usually closer to five). However, the information conveyed was extremely valuable and very timely, allowing us to address any problems quickly. With day-to-day issues identified and resolved quickly, most of the discussions at our weekly executive staff meetings became focused on long-term issues. With fewer issues to discuss, the executive meeting soon became a biweekly (and later monthly) event.

Each of our daily standup meetings had a very similar agenda:

The Daily Accountability Board was added after I left by my successor, Steve Kane. It was a large whiteboard with the day of the month written across the top and each executive staff member’s name along the left side. The whiteboard, and our executive standup meeting, was in our de facto obeya room, which wasn’t a room but a wide section of hallway that was open and visible to all, at all times. When issues were brought up during the standup meeting, members of the team took ownership of the issue and placed a sticky note on the board that included the date when the person committed to having it resolved.

When that day arrived, the person had to report on the status (there was no daily report until the date arrived) of the problem. If the task was complete, the sticky note was removed. If it wasn’t complete, a red dot was added to the note for each day it was late, and if the date was rescheduled the dots stayed. This wasn’t to overtly create a “strike” against the person, but was a visual indicator that we had somehow underestimated the time required. The delay could be due to workload, complexity, or other factors. Knowing what caused it helped us learn and improve.